This morning I was considering what to blog about. I thought about a couple of recent White House reports, the National Climate Assessment on climate change, and Not Alone:  The First Report of the White House Task Force to Protect Students from Sexual Assault, but those seemed kind of obvious. As I waited for the bus, though, I started to think about all the ways government information relates to daily life. So I decided to see how many government publications and web pages I could find related to my morning activities. I searched in a variety of places, including the Catalog of Government Publications, USA.gov, and Wisconsin.gov. Here’s a sampling of what I found.

I had blueberry muffins and orange juice for breakfast. If you search USA.gov, you’ll come up with some recipes, like this one featured on the USDA’s SNAP-Ed Recipe Finder page. I wanted to get a little more off the beaten path, though; I found this in the CGP: “Mechanisms involved in the beneficial effects of blueberries on neuronal aging and behavior … annual report.”   I confess, I buttered the muffins. Turns out there is a USDA publication How to Buy Butter, from 1995, and several Wisconsin depositories have it in print.

I was sad to learn of Maya Angelou’s death (it was the first item in the top-of-the-hour radio newscast this morning).  Deep down, I saw her as so full of life that I thought she’d live forever.  Among the countless profiles of and interviews with her, one appeared in the book Voice of American Interviews with Eight American Women of Achievement, by Chantal Mompullam, published in 1985 by the United States Information Agency (SuDoc number IA 1.2:V 87/8).  It’s also available in full view in HathiTrust.  The book also features interviews with Grace Hopper, Betty Friedan, Nancy Landon Kassebaum, Mary Calderone, Helen Thomas, Julia Montgomery Walsh, and Nancy Clark Reynolds.

By the end of the day, the White House blog had paid tribute to Dr. Angelou.

Heading outside, I tried to determine whether I’d need an umbrella today. (I should’ve checked the National Weather Service before I left home!) Dane County experienced some flash flooding last night. Both ReadyWisconsin and Ready.gov have information on flash flooding. If you ever have to use flood insurance (and I hope you don’t), check out the National Flood Insurance Program.

I passed by a blooming lilac bush on my way to the bus stop. Most of the year, I commute to work by bus, as I did today, but with the longer days and warmer weather, I plan to bike often. I can find out a lot about how people commute to work in my area and the nation by consulting the Census Bureau’s page on Commuting.

The radio program I listened to as I waited for the bus was considering Egypt’s elections. There’s a plethora of information on Egypt on or linked to this State Department Country Fact Sheet.  page. Lots of other publications came up when I searched the CGP for the key word “Egypt,” including several hearings. In 2005, the Commission on Security and Cooperation in Europe had a briefing on The Meaning of Egypt’s Elections and Their Relevance to the Middle East : October 12, 2005. It wasn’t on quite the same topic, but an April 2014 publication from the Law Library of Congress, Egypt: Pending Charges Against Mohammed Morsi, also caught my eye.

As my bus approached campus, I saw Megabus headed for Minneapolis. The Wisconsin Department of Transportation lists intercity bus service in Wisconsin at its Long Distance Intercity Bus Service page. The DOT also has a Wisconsin Get-Around Guide, which has not only intercity bus information (and a map of routes), but links to local transit companies around the state.

And all of this is before I even got to work!…

Now I issue the challenge to you, my colleagues.  What government information can you find related to some part of your day?

You can view a PDF the slides for this presentation at: http://tinyurl.com/llvybnm You’ll have to click the blue “Download” button on the right to actually get to the PDF.

The highlights…
The name of the program would change to “Federal Information Access Library Program.”

The new program would allow for some division of services and collections, and (I think) would not require changing Title 44, the current federal law that governs the depository library program.

Instead of two kinds of participating institutions–selective and regional depository libraries–there would be four:

These libraries would have a service focus; in addition to providing access, they would provide
• Reference service
• Training
• Marketing
• Collection management
• State/region coordination (twice!)

Affiliated Federal Access Libraries
* No‐fee access
* Online‐only
* Allows small (< 10,000 books) libraries to be part of the program (the Superintendent of Documents said this could include school libraries, small public libraries, tribal and tribal college libraries)
These libraries would have a service focus; in addition to providing access, they would provide
• Bibliographic access
• Reference service

Federal Information Access Assurance Partners (not necessarily libraries; the Superintendent of Documents said the Partners might include federal agencies, consortia (of what, she didn’t say), independent entities like the Internet Archive; she did not mention Hathi Trust)
* No‐fee access
* Permanent public access
* Collection focus

The Federal Information Access Assurance Partners (FIAAP) (or the “not-necessarily-libraries”) would be part of a “Government Information Access and Preservation Network” which would have an advisory board separate from the Depository Library Council (I suppose the DLC would have a different name). FIAAP activities could include
* Cataloging/Metadata
* Collection condition assessment
* Digitization
* Hosting
* Preservation
* Harvesting
* Others?

Regionals had a small amount of time at their meeting Wednesday evening to react to the proposal. The SuDoc did not want us to focus on/ask questions about details/operations. She wanted us to react to this at a “high level.”

I believe GPO will be presenting this plan to directors via conference calls, and at meetings of various national library associations.

Government Information Day 2014 is Friday, June 6 at Memorial Library in Madison. The program begins at 9:30 a.m. and ends at 4 p.m., and everyone is invited to attend the GIRT business meeting that follows.

Highlights of this year’s program include:

We hope you’ll join us! You can see a full schedule and register online at http://wla.wisconsinlibraries.org/girt/government-information-day

Not a topic I like covering, but I thought I’d post a few government resources relating to the kidnapping of nearly 300 female Nigerian students on April 15, 2014.

U.S. First Lady Michelle Obama made the weekly address from the White House last weekend, talking about Mother’s Day and the kidnapping.

The U.S. State Department’s page on Nigeria has links to State Department press briefings and press releases about the situation, and a fact sheet that provides information about the activities of the kidnappers, the group Boko Haram, over the last few years, and about various U.S. Department of State initiatives and programs to assist Nigeria’s counterterrorism efforts,

In 2012 the U.S. Institute of Peace published a special report entitled What Is Boko Haram?

I thought I’d look at the United Nations to see what information it might have.  Looking at its website reminded me what a big bureaucracy the UN is, and how many crises are happening around the world.  This means the UN has a lot to respond to, and it’s not the most nimble of organizations.  It does have a couple of commissions, legal instruments, etc, that might deal with elements present in the Nigerian situation.

the United Nations Entity for Gender Equality and the Empowerment of Women – See more at: http://www.unwomen.org/en/about-us/about-un-women#sthash.fnoOsFp4.dpuf

For the first time, the Federal Depository Library Council Meeting and Conference was held in the Government Printing Office buildings.  The annual conference was held April 30 to May 2, having been postponed from last October because of the government shutdown.

You can download Conference Proceedings (slides from most presentations) and webinar recordings (using i-cohere software) from GPO.  I’ll highlight some of the presentations I found most interesting later this month.  Right now, I’m going to share a few impressions (and photos) related to meeting within GPO.

If you haven’t been to GPO’s facility in Washington DC, it’s HUGE.  By the end of the 1930s, GPO occupied three buildings in downtown Washington DC, with a total of 31.5 acres of effective floor space.  Back then it had its own hospital, cafeteria, and sports team, musical groups, bowling alley and credit union.  (It still has the cafeteria and credit union.)  It does have its own police (note the car below).  At its peak, in the 1970s, GPO had nearly 8000 employees.

You can read more about GPO’s history in the exhibit brochure Keeping America Informed:  The United States Government Printing Office, 150 Years of Service to the Nation or in the book of the same title, which was distributed to all depository libraries. 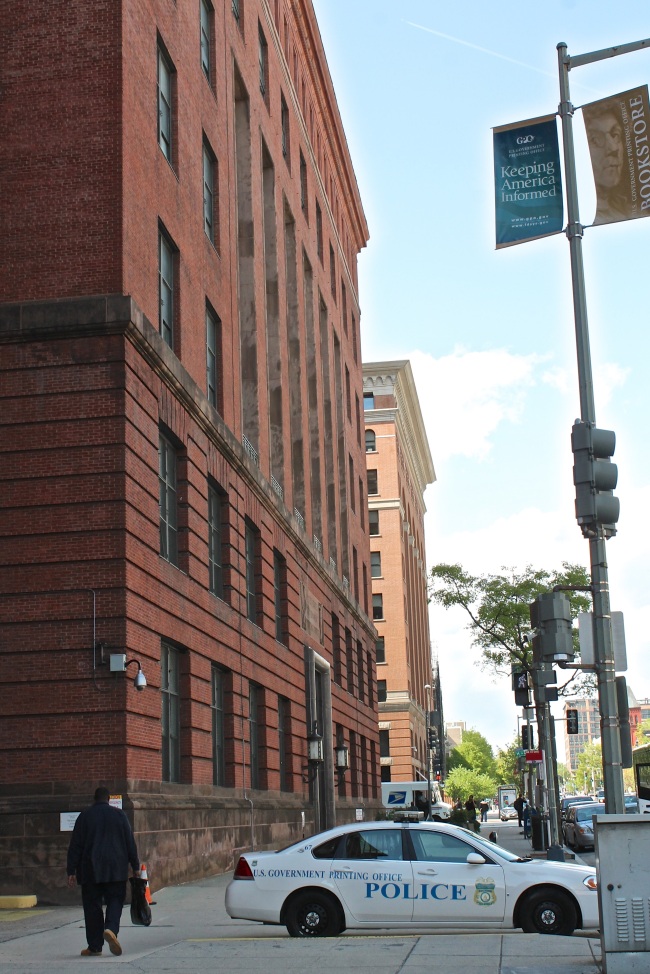 I imagine the musical groups performed occasionally in Harding Hall, the room where the Council sessions were held.  I know it also hosted dances, and fundraisers for war bonds.  They do not make public spaces like this any more. 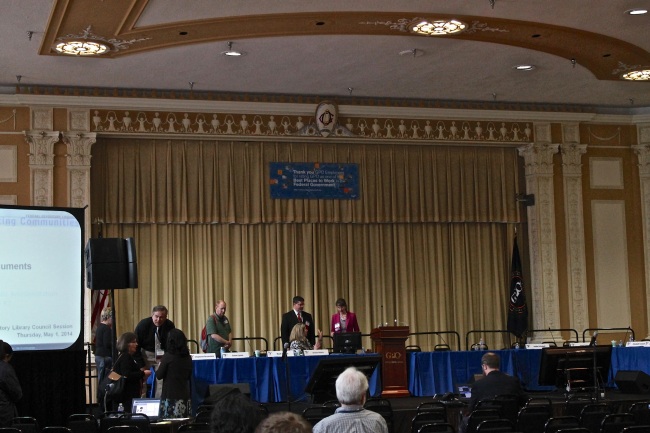 Here’s the back of the hall… 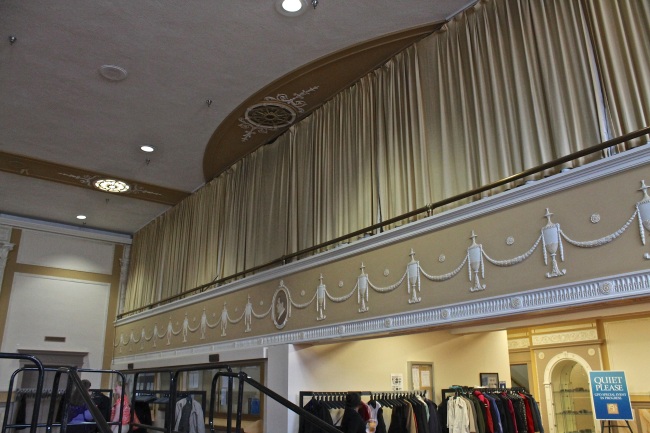 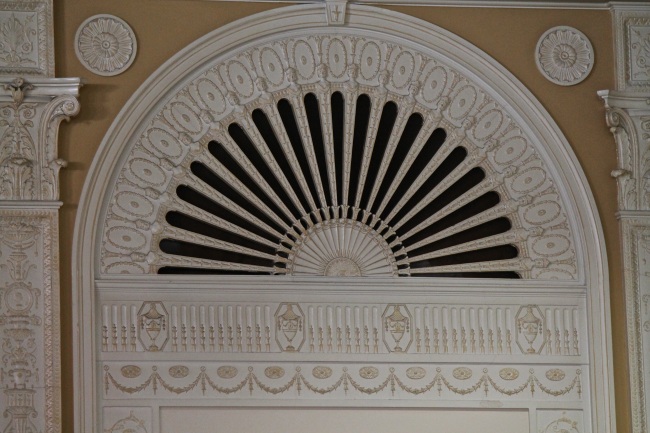 I wish I could say that the bookstore had as interesting architecture as Harding Hall has, whether the style was classical or modern.  But the bookstore is a neutral-colored, large office room with plain walls with some stand-up book shelves.  It is well-lit, I can say that, and roomy, roomy enough to hold the conference poster session comfortably.  The entrance to the bookstore is more impressive… 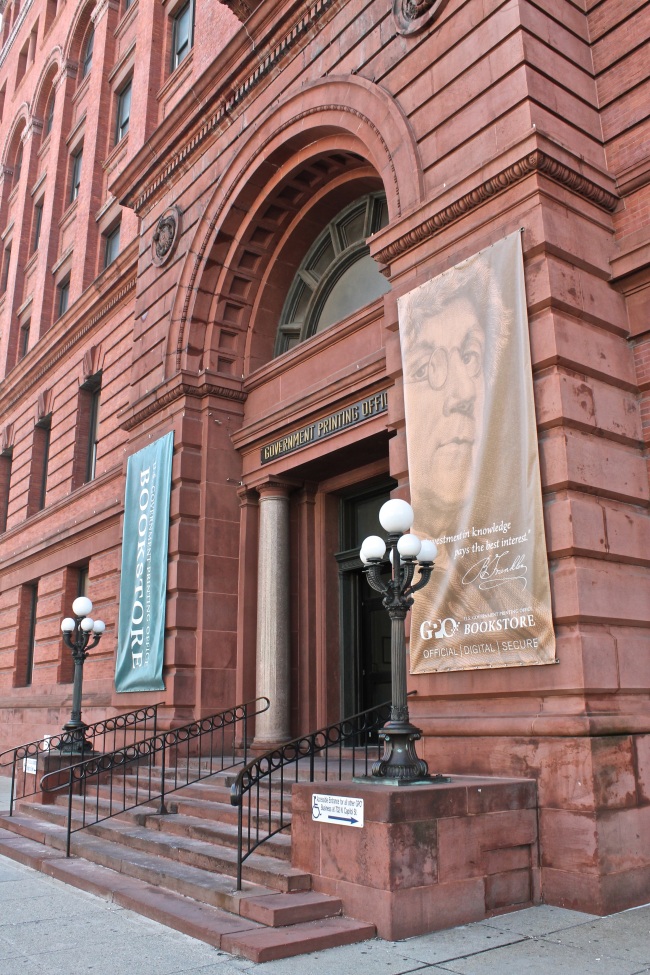 GPO really is in the heart of Washington DC, about three blocks from the Capitol Grounds (it’s three more blocks to the Capitol building itself)…all the easier to print and deliver the Congressional Record.  I think the following photo demonstrates that information dissemination, through the GPO and FDLP, is at the heart of our democracy. 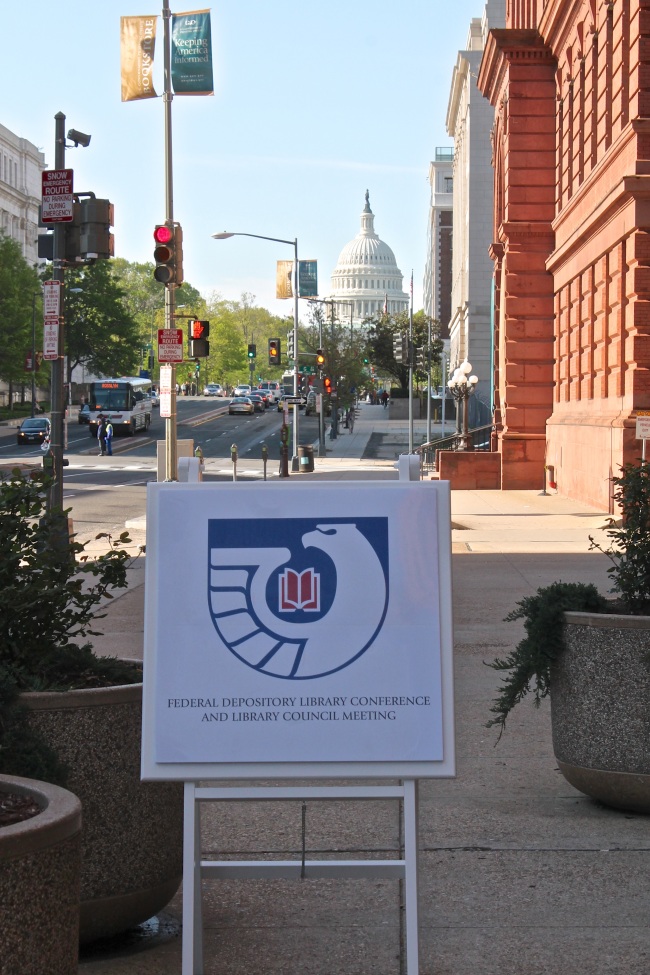 Wonder where the eagle in the FDLP logo comes from?  Maybe it was inspired by this: 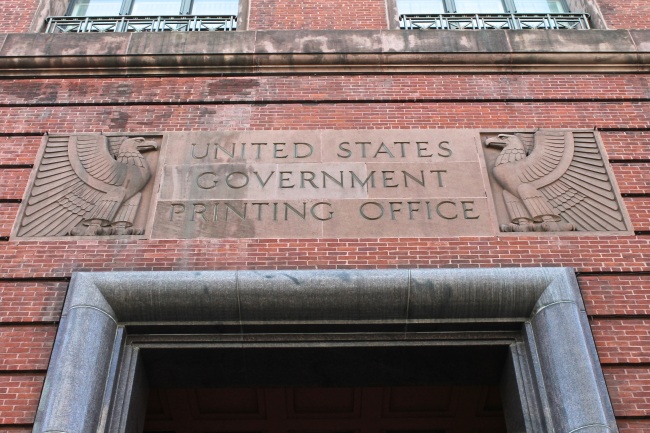 I found the GPO crest in Harding Hall interesting, but not very readable.   I’m glad this logo is not used today. 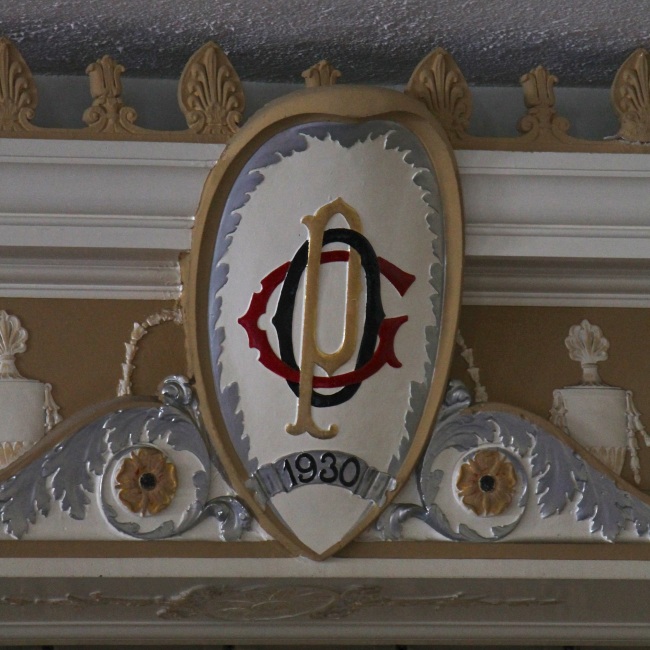 Security at GPO was tight.  We had to go through a metal detector each morning, show a photo ID, and have our names checked off a list of conference attendees before we could take an escorted elevator ride to Harding Hall.  We could only move between the four rooms that hosted sessions, and the cafeteria.  GPO staff were posted at corners and elevators to help us find our way through the maze of the building.

As kind of a grammar nut (I like diagramming sentences; the college class I took where that’s all we did was one of my favorite classes ever), unnecessary quotation marks bother me.  I especially don’t like seeing them outside of the Government Printing Office (but other agencies are responsible for the editorial content of what GPO prints, right?). 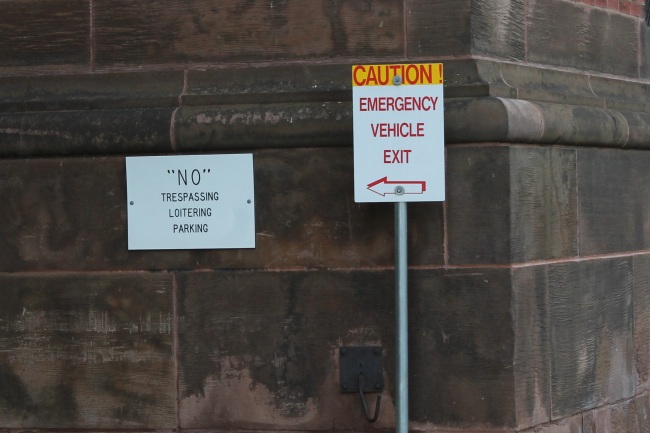 To end this post on a positive note, the GPO staff that we ran into throughout the conference, whether those tasked with guiding us through the building, the staff that work directly with the depository program, or people going about their regular work in the building (or getting food in the cafeteria) were cheerful and gracious about 280 guests invading their place of employment!   GPO put on a great conference!